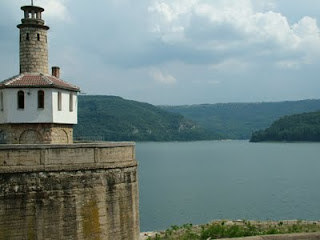 Last week we decided to have an awayday, but we couldn't decide where to go. Net remembered that Mum and Dad had mentioned that they had taken Karl wake boarding at Stamboliski Dam and that this was also on our list of places to visit. So our destination was decided, all that remained was for me to work out how to get there. Isn't it typical that whenever you look for a map you can never find one, I think that they have probably been tidied away only to see the light of day when we are next looking for something that has also been lost or hidden. The best that I could manage was a map of Eastern Europe, it didn't go to much detail but luckily Stamboliski is one of the largest dam lakes in Bulgaria so it was actually shown on there. From the map it looked as though I had to head out on the main Sofia road from VT, turn off and head towards Vishovgrad until I got to a place called Mladen, and from there it would be easy to find. Most of the trip was simple enough, I even found the turn off towards Vishovgrad easily enough, it was once we got into Mladen that the confusion started. According to the map from Mladen I should take the road to Gorsko Kosovo, the only problem was that we couldn't find the road. 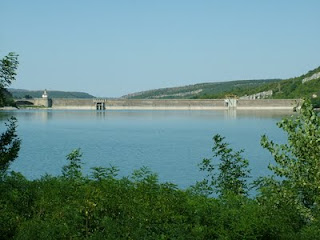 We did try one but that seemed to be taking us in totally the wrong direction. The only option that I could come up with was to plug the SatNav in and see what options that gave us, even with it needing updating. The SatNav found our position, and eventually worked out which direction we were facing no wonder we couldn't find the road it wasn't in the village but a couple of miles outside of it. Now that we were back on track we could enjoy our exploration of the Bulgarian countryside. We passed through a village, Byala Reka, where we had looked at a house while we were over viewing properties. We even drove past the house, it doesn't seem as though it ever did get sold. Such a shame to see it looking a bit ramshackle and unloved, but we are more than happy with where we are. As we approached Gorsko Kosovo we were confronted by the dam wall, it is quite an impressive sight providing you don't worry about all of the water that it is holding back. Looking up at the dam wall I couldn't help but think of the film "The Dambusters", but there wasn't a sign of a Lancaster anywhere. 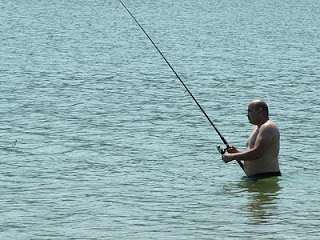 We drove up through the village and made it to the top of the dam wall, it did seem slightly worrying when looking about you there were various rocks and stones that had slid from the hillside. We didn't hang about there for too long, but headed further along the lakeside. I was quite surprised at the number of chalet type huts that were dotted about either side of the road, and various tracks and paths going down to the waterside. Going further along the road we noticed that we were getting closer and closer to the water, so at one point we just parked up walked 25 yards through some bushes and found ourselves on a 'beach'. It was very pleasant hearing the small waves lapping at the beach, quite reminiscent of Baiter Park in Poole. Stamboliski Dam is a wonderful place to take the family, even if only for a picnic, people camp and fish there, go water and jet skiing, but for the most part people just go there to relax. 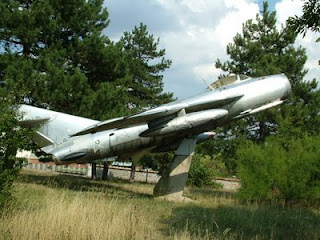 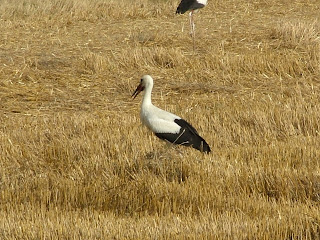 We let the SatNav decide on our route home, and it took us out of the lake area the back way, along a small road that twisted and turned up the hillside. Eventually it took us through Suhindol, and to my surprise there was an old aircraft stuck on a plinth. It looked a lot like an old Sukhoi, ok so it might not have been a Lancaster but it was good enough for me. I am used to seeing various statues in towns and villages, but this was the first time that I have seen a plane. I think that the last ones that I can remember seeing were the gate guardians at various air stations in the UK. Besides the aircraft I didn't notice too much about Suhindol, but maybe it has hidden depths. We did stop for coffee in Pavlikeni on our way home, and decided to go home the Polski Trambesh way. I think that it was quite a good idea as we were able to see just how much the baby Storks have grown, there were 3 of them strutting round a field while Stork just looked on and supervised. March and the Martenitsas seem such a long time ago now. 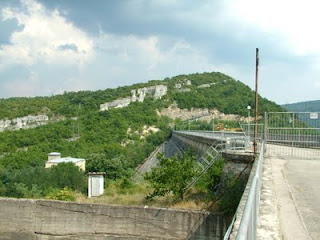 We enjoyed Stamboliski so much that on the Sunday we took Mum and Dad there for a picnic.