What a Difference a Week Makes

Who would have thought that just over a week after our off-roading exploits that we would be hard at work in the garden. I am pleased to report that the last of the snow in our garden has disappeared, and that includes the mound caused by the avalanches from the greenhouse. Everywhere that you look Mother nature is slowly waking up and wiping the sleep out of her eyes. We still haven't seen any Storks yet, so we're still wearing our Martenitsi, although now they are beginning to look a bit bedraggled and manky. Still, they shouldn't be on for much longer and they can then adorn some fruit trees in the garden. 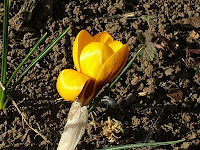 The dogs and the cats are definitely enjoying the warmer weather. The dogs can't wait to get outside first thing in the morning, chasing each other round, barking and trying to play wheelbarrows with each other. We have tried to explain that they are both boy dogs, but they either choose to ignore us or they have come out of the doggie closet. The cats just give them a good ignoring, Albert fights with Gremlin, and Gremlin fights with Albert, but at least they are now leaving the vegetable racks alone. Mr Cat remains aloof from it all, and is much more concerned with food. A downside to the two cats squabbling between themselves, is that the crocuses that have just flowered tend to end up a bit squashed and mangled. Albert seems to like this time of year as he has already returned home with a bird, and took great delight in throwing a mouse against the French windows last night. I still wouldn't let him in until he had got rid of it, I would have thought that Gremlin would have been the better mouser, but they do share the spoils of war.
Since the good weather has put in an appearance, we have been busy outdoors. It makes a very nice change after having been cooped up indoors during the winter months. So far we have been faffing around with a satellite dish trying to pick up different programmes, without much success so far, but we will get there in the end. Putting the dish up has meant sacrificing the Quince tree, but it will be replaced with other fruit trees that we will actually use.
We have started to turn the soil in the garden, luckily the winter seems to have done the trick from when we turned it all in the autumn. It is very easy to dig, and the majority of the weeds seem to have been killed off by the frost and snow. Net's studio has now been clad in bark strips, complete with the famous Bulgarian bendy nails. It is looking quite smart over there now and we can't see any of the mud bricks, mind you courtesy of the bendy nails I now have a thumbnail like the ace of spades where I managed to wallop it with the hammer. Moral of the story is don't hold nails here when you are trying to hammer them into wood. The wood staining has also started, and 4 tins later we have managed to cover about half of it. The wood seems to drink the stuff, but it is bloody difficult to scrub off of your hands. At one point I had one normal hand and one black hand, not to mention a black streaked stomach. Yes, I hate to admit it but I have been topless for the last few days, apologies to anyone eating who now has this mental image stuck in their mind. 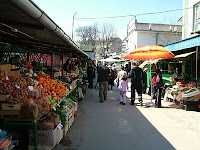 It has not been all work in the garden though, as Peter and Claire needed some bits and pieces. They can probably get them in Popovo, but we knew where to get them in Gorna, and it was also a nice day out in the sunshine. By the end of the day if we hadn't made various trips back to the car Peter and I would have ended up like Packhorses. On the way to the Agricultural chemist we took a walk through the fruit and vegetable market, and tried to give translations for the items on sale. We did take time out for lunch, and even ate outside, something that we wouldn't be able to do in mid March back in the UK. It must be spring here as even the Bulgarians are shedding layers of clothing, it is almost as though someone somewhere has thrown a switch and declared that winter is now over. I certainly hope that they have got it right. We have been told that our new Polish/American neighbour arrives in just over a week, so that will give us something else to look forward to.
We have also had an evening playing cards with Mum and Dad, it might sound like a simple thing but we enjoy their company and any time spent with them is always enjoyable. Whilst there it was also arranged for me to go up and replace their kitchen taps, as they have been having trouble turning the hot tap on and off. So I spent half an hour underneath their kitchen sink, and job done, not even a slight leak from any of the pipe unions. Mum was a bit like a kid in a toy shop, and seemed pleased with no longer having to boil a kettle to do the washing up. Her thanks were reward enough, but I did accept a cup of tea though even though I did turn down the offer of biscuits to go with it.
Today Net cut a neighbour's hair, when we first arrived in the village Violetta seemed like a very imposing lady, but we have since learnt that her bark is worse than her bite. Every time that we see her or her husband George we always get a Zdrasti accompanied by big waves and smiles. They might be Gypsies, but they have never cadged from or done anything against us, so we treat them as human beings. My Grand mother taught me to treat others as I'd wish to be treated myself. A couple of times we have fallen foul of this, so we are still cautious, but it doesn't cost anything to be polite. 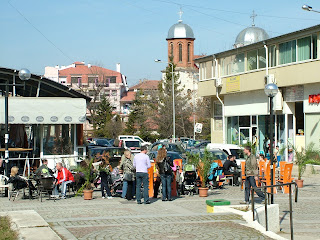