Thank You For The Birthday Wishes 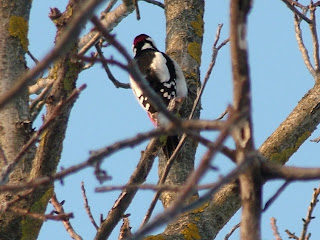 Well here we are, almost midway through February, and I find it hard to believe that the winter has been so kind to us all out here. The other day we even had temperatures that reached the mid 20s out in the sunshine. We have been blessed with blue skies, sunshine, fruit trees starting to bud, bird song and woodpeckers trying to batter themselves senseless up in the walnut trees. Even the garlic that we planted back in September is poking up green shoots through the semi frozen earth. We are still expecting Mother Nature to have the last word, with final snow flurries and more night time frosts. The days are slowly getting longer, and the nights shorter, and before we know it Spring will be with us and everywhere can erupt in a riot of varying shades of green. Looking at the forecast the temperatures are due to dip down towards normal levels, but no snow on the horizon just yet, although things have a habit of changing on a daily basis.

Since Net has been suffering with her asthma she has given up smoking, it has now been nearly two weeks since she last had a cigarette. So far there have been none of the normal withdrawal symptoms, but keeping busy has probably helped in this. We still try to not let her overdo things, but sometimes that is easier said than done. We have been helping out Claire and Peter Kidd quite a bit, as their village isn't too faraway from ours, but more about that in another blog.

Well yesterday I notched up my half century on this Earth, some say that it is a milestone but I can honestly say that I woke up feeling absolutely no different to when I went to sleep. We don't really celebrate birthdays, which can come in handy as half of the time we struggle to actually remember what day of the week it is, never mind the date. Just part of the joys of no longer having to live our lives by the clock or the calendar, although we do seem to lose the odd day here and there. I first went round to the magazin and bought a box of chocolates, to enable the villagers to help celebrate my birthday. Anyone going into the magazin can help themselves to a chocolate, and Reni lets them know whose birthday it is. There is no need for any newspapers in the village, as everyone seems to soon know anything that is happening.

Due to the unseasonably warm weather the snow and ice have withdrawn enough for me to do one of my favourite jobs, Poo Patrol. The joys of having 3 dogs had largely been hidden by the snow, but it could be put off no longer. So there I was armed with my 'doggie bag' and trusty trowel, do I start at the top of the drive or the bottom? The top of the drive being in sun decided it for me. Some of the 'dog eggs' had to be chiselled away from the gravel, but I managed to avoid collecting any more freckles. A job well done, and Net decided that as the house had largely been Spring cleaned we would pop over to see Claire and Peter, just to find out how they were getting on. By the time we got back home it was dark, and even though there was a chill in the air it wasn't cold enough to light the fires. We did put the gas fire on down in the cellar, it didn't suit either of us, but it did take the chill off. Well it did until it ran out of gas, and with helping Claire and Peter we hadn't filled up our spare one either. Topping them both up would be my first job in the morning, along with paying the phone bill.

So bright and earlyish, I sorted out the phone bill and put the empty gas bottles in the back of the car. Net didn't want to go with me so I decided to take Fenny with me instead. Normally he likes going out for a ride with Daddy, but today he was very reluctant to actually get in  the car, but once in he sat there pleased as Punch with himself. I drove round to the village Post Office, but couldn't pay the phone bill as the electric had gone off throughout the village, just in the time between me leaving home and getting there. Oh well, not to worry I can always try again on the way home from the garage. Fenny soon got bored looking out of the windscreen from the passenger seat, so hopped over into the back and curled up for a nap. Part of the way down the 'Ridge Road' a young lad was hitching a lift so I stopped to pick him up as it's in the middle of nowhere. He did a bit of a double take when he noticed Fenny on the back seat, especially when Fen yawned. The young lad sat there rigidly, all the way to Draganovo, even when Fen put his chin on my shoulder as he checked to see if we were at the garage yet. They do have a very wary outlook towards dogs, and I guess that a fully grown Boxer, not on a lead, yawning and showing shoelaces from his chops could be a bit disconcerting.

Once we got to the garage the young lad couldn't get out fast enough, and Fen just casually hopped back over into the passenger seat, as if to say that it was his seat. The fellow at the garage is used to us and just carried on fuelling us up and then directed us to the gas point to fill up the bottles. I did have to wipe shoelaces from the steering wheel, but nothing on any of the seats. The drive back was uneventful, I had to stop at the magazin for a fresh loaf, and Fenny sat there as good as gold, just watching out of the window and waiting for Daddy. Nothing escapes notice, and they all seemed fascinated that Fenny had been for a ride in the car. I noticed that power was on in the magazin, so there shouldn't be any problem in the Post Office. Sure enough, it was into the Post Office, pay the phone bill and then home.

As soon as we got into the drive and the gates were closed, Fenny hops out and tells Sirius and Bonnie all about it all.
Posted by Unknown at 18:09